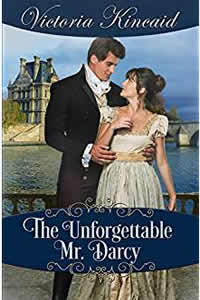 Mr. Darcy arrives at Longbourn, intending to correct the mistakes he made during his disastrous proposal in Hunsford.  To his horror, he learns that Elizabeth Bennet was killed in a ship’s explosion off the coast of France—in an apparent act of sabotage.  Deep in despair, he travels in disguise to wartime France to seek out the spy responsible for her death.

But a surprise awaits Darcy in the French town of Saint-Malo: Elizabeth is alive!

Recovering from a blow to the head, Elizabeth has no memory of her previous life, and a series of mistakes lead her to believe that Darcy is her husband.  However, they have even bigger problems.  As they travel through a hostile country, the saboteur mobilizes Napoleon’s network of spies to capture them and prevent them from returning home.  Elizabeth slowly regains her memories, but they often leave her more confused.

Darcy will do anything to help Elizabeth reach England safely, but what will she think of him when she learns the truth of their relationship?

“A Darcy You Truly Will Never Forget.  Five star read!!! This book is a definite MUST read!!! This is one of the most well-written stories that I have ever had the pleasure to read!! The characters are well-developed, the plot flows effortlessly and is very engaging, and the prose paints a vivid image of the events as they unfold!!! Once I started reading this book, I could not put it down….I had to read it straight through. I will definitely read this book over and over again.” – Kindle Customer

Five Stars. “Fantastic! I loved this book from beginning to end. I couldn’t put it down until I finished it. I’m not going to lie but I needed some tissues.”  — Kindle Customer

“I will say that anyone who enjoys Ms. Kincaid’s books will love this one too because it’s as well-written and engaging as her past stories. I also found the writing to be very strong because Ms. Kincaid is the kind of writer who knows how to keep her writing tight and interesting throughout the entire story. She also writes terrific dialogues between her characters and this one has plenty of lines that take hold of a reader’s heart while moving her story along at a steady pace.”  — Just Jane 1813