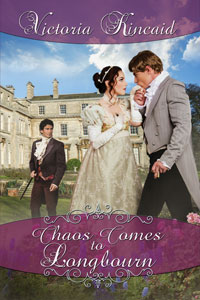 While attempting to suppress his own desire to dance with Elizabeth Bennet, Mr. Darcy flees the Netherfield ballroom only to stumble upon a half-dressed Lydia Bennet in the library.  After being discovered with her in a compromising position, Darcy is forced to make her an offer of marriage.

Fearing the Bennets will attempt a similar “trick” with their brother, Mr. Bingley’s sisters convince him to leave Hertfordshire without any intention of returning.  After Elizabeth refuses Mr. Collins, a heartbroken Jane Bennet accepts his proposal.

Having resolved to propose to Jane, Bingley returns to Longbourn; but when he learns of her betrothal, he makes an offer to Elizabeth instead.  She accepts, with the hope that Jane will change her mind if Bingley remains at Netherfield.

Meanwhile, Sir William Lucas is aware that Wickham had actually compromised Lydia in the Netherfield library and blackmails him into proposing to Charlotte Lucas, who is in danger of becoming an old maid.

Hertfordshire has become a tangled web of misbegotten betrothals.

Although Darcy yearns for Elizabeth, he feels honor bound by his promise.  Elizabeth is also developing feelings for the master of Pemberley, but he has never seemed so far out of her reach.  How can Darcy and Elizabeth unravel this tangle and reach their happily ever after?