I wasn’t quite sure what to expect from my first Jane Austen Society of North America (JASNA) Annual General Meeting (AGM).  Many other JAFF authors had attended past AGMs and seemed to enjoy them, but I wasn’t sure what I would find at my first AGM in Washington DC.

I learned a couple things.  One is that the AGM is huge: more than 850 attendees!  I knew Austen had a lot of fans, but wow!  Another was that the conference itself was a very fun hybrid of the Modern Language Association Conference and Comic Con.  Where else could you find women attending lectures on class and gender in Emma while wearing full 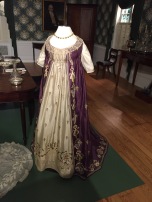 AGM panels during the day have quite an academic bent, examining aspects of Austen’s works through literary and historical lenses.   I particularly enjoyed one that explored how Emma uses humor as a strategy as a woman in a male-dominated world.  It got me thinking about how humor functions in many of Austen’s other novels.

AGM attendees also had the opportunity to enjoy tours of Washington, DC, Mount Vernon, or Annapolis as well as special exhibits at the Folger Shakespeare Library (about Shakespeare and Austen) and the DAR museum (about Regency fashion).  There were also musical performances and a theatrical production of Sense and Sensibility.  An emporium during the day sold Austen related books, gifts, teas, and other items, as well as offering

The highlight of the conference, however, was Saturday night—starting with an elegant and delicious dinner.  This was followed by a promenade around the many levels of the hotel, which gave attendees an opportunity to show off their beautiful Regency garb.  You haven’t lived until you’ve seen two levels of escalators covered in people wearing 1800s fashions.  There were some truly spectacular dresses!  I was quite envious. J  After the promenade there was an evening of Regency dancing.  A wonderful woman directed the myriad dancers at a speed slow enough that novices could participate.  Everyone looked just beautiful!

With all of that to enjoy, however, I have to say that my favorite thing about JASNA was

the camaraderie.   I had a chance to meet two of my Facebook buddies whom I had never seen face-to-face before—and made new friends as well. Where else can you go to find people who get just as excited about Austen as you do? Or who are equally knowledgeable?  Total strangers are interested in debating why a character did something or how the settings from two different books compare.  Perhaps your household is different, but my family tends to start rolling their eyes after too much Austen talk. J There’s no such thing at JASNA.

If you have an opportunity to attend an AGM, I would encourage you to consider it—even if you don’t know anyone who is attending.  You can go for the lectures, the exhibits, the costumes, the shopping, the dancing, or the friendships you might make.  But the best reason of all to attend is because Jane Austen fans are your tribe!