Nissa at Of Pens and Pages wrote a lovely review of Darcy’s Honor: “You can always expect a fresh and riveting story from Ms. Kincaid’s variations. Darcy’s Honor was gripping, heartbreaking and warming, and engaging.” Her blog also features an excerpt and a giveaway!

Also, the book received another lovely 4.5 star review–this one at From Pemberley to Milton. Rita writes: “I can honestly say that I believe everyone will love this book. I highly recommend it to all readers who want a romantic, exciting, page turner book.”  Her blog also features a giveaway and an excerpt from the novel!

I’m  a guest at JustJane1813, where she gave my new novel, Darcy’s Honor, a 4.5 star review.  There’s also an excerpt from the novel and a giveaway.  In her review, Claudine writes,

“I also loved the camaraderie that was developed between Darcy and Elizabeth because it was built upon the slow, but steady development of trust and respect between them as their relationship evolved throughout the story. I felt that their collaborative efforts in this story mirrored, in many aspects, the ways that their relationship was crafted in The Secrets Between Darcy and Elizabeth, which was the book that started my love for Ms. Kincaid’s writing. Ms. Kincaid’s characterizations of Darcy and Elizabeth were spot-on and a true delight to read. I love her version of a besotted Darcy, especially when he tries to take charge of a situation for Elizabeth’s sake, as well as a strong-willed Elizabeth, who is determined to take charge of her own life, even when that path isn’t the easier one.

Ultimately, it is the liveliness of Darcy’s and Elizabeth’s minds, along with some help from a couple of unanticipated allies, that helps to save the day for our dear couple. Ms. Kincaid’s fluid and engrossing writing style make their journey an absolute pleasure for her readers to experience!”

Below is an excerpt from Darcy’s Honor in which Darcy helps Elizabeth down from the back of a horse after encountering her on a road near Longbourn:

She clambered awkwardly down from the saddle and stood on unsteady legs as she smoothed her skirts around her ankles. Her whole body shook. “Are you unharmed, Miss Bennet?” he inquired, running his eyes up and down her form.

She gave a shaky laugh, and Darcy could not help admiring her fortitude. Many women of his acquaintance would have swooned after such an episode. “Yes, I thank you for your timely intervention. I believe the only damage is to my dignity. I assure you that I do not customarily ride a horse like a sack of potatoes.”

Darcy blinked. “Undignified” was not one of the adjectives he had thought to apply to the sight of Elizabeth on the back of a horse, particularly not with so much leg revealed. “Of course. I would imagine you are a far superior rider with a proper sidesaddle.”

She brushed errant strands of hair from her face. “You are very kind to make such an assumption given the display you just witnessed.”

How odd to be discussing Elizabeth’s horsemanship when something was so obviously wrong. How had she acquired a horse, and why was she riding at such speeds?

“On the contrary,” Darcy returned. “It requires great skill to remain atop a strange horse under such circumstances. I am quite impressed.”

She regarded him with narrowed eyes for a moment, as if assessing his sincerity. Finally, she said, “I thank you for the compliment, sir.”

Would she think him impertinent to inquire about the circumstances of her ride? But surely the unusual situation cried out for some kind of explanation. “You were in quite a hurry. Is there an emergency?” he asked.

She glanced over her shoulder at the road behind her. “No, I do not believe so.”

This ambiguous response left Darcy at something of a loss. Why had she ridden so fast if there was no urgency? And why did she watch the road so intently? Finally, he settled on a different but not unrelated line of inquiry. “I did note that you departed the church on foot.”

He had meant his words as a light-hearted jest but cursed himself for a fool when he saw the blood drain from Elizabeth’s face. He cleared his throat. “Does, er, the Longbourn stable boast such a creature?” he asked, knowing full well she had not had sufficient time to reach her home.

“Borrowed the mount?” he inquired as though a simple explanation would work. He reached out and took her gloved hand in his. “Please be assured, Miss Bennet, I only wish to help.”

Her eyes widened as if she had not expected such an offer from him, although he could not imagine why. But he was then rewarded with a small smile and a slight loosening of the tension in her shoulders. She let out a long breath. “No, indeed. The horse actually is the property of”—she cleared her throat —“Viscount Billington.”

“Billington!” Darcy echoed in surprise, releasing her hand. That was the last name he expected to hear. “He lent you his mount?” Was Darcy wrong in assuming she wished to have no connection with the man?

“He did not precisely loan it to me—” She covered her mouth with her hand. “Although I am quite concerned he could label me a horse thief. I must be sure the beast is returned to him.” She pressed her lips together into a white line. “Perhaps I should not have— Oh, what a terrible tangle I have created!”

Suddenly, the various oddly shaped pieces of the puzzle fell into place. He took a step closer to her. “Billington accosted you on the road?” His voice was a low growl.

She nodded miserably but lifted her chin and met his gaze. “The horse was the only way to escape.”

To Darcy’s own surprise, he began to laugh. “Serves him right! You should keep the animal.”

Elizabeth’s eyes were wide, and her mouth hung open. Darcy could only imagine the expression on Lord Henry’s face when Elizabeth jumped into his horse’s saddle. Darcy laughed even harder.

Her brows drew together. “Did you, perhaps, help Mr. Lehigh finish off the communion wine?”

Thinking of the vicar sobered Darcy, and he shook his head. “Miss Bennet, to be clear, I believe you should be commended. A lady should always have a horse at hand when encountering such a man,” Darcy said.

And here is the synopsis:  Elizabeth Bennet is relieved when the difficult Mr. Darcy leaves the area after the Netherfield Ball. But she soon runs afoul of Lord Henry, a Viscount who thinks to force her into marrying him by slandering her name and ruining her reputation.  An outcast in Meryton, and even within her own family, Elizabeth has nobody to turn to and nowhere to go.

Darcy successfully resisted Elizabeth’s charms during his visit to Hertfordshire, but when he learns of her imminent ruin, he decides he must propose to save her from disaster.  However, Elizabeth is reluctant to tarnish Darcy’s name by association…and the viscount still wants her…

Can Darcy save his honor while also marrying the woman he loves?

I hope you enjoy it!

Here’s the cover for my upcoming novel, Darcy’s Honor, which is available for pre-order on Amazon and Smashwords (and soon at BN.com, Kobo, and Apple).  It should be out on April 13 on Amazon and a little later elsewhere. 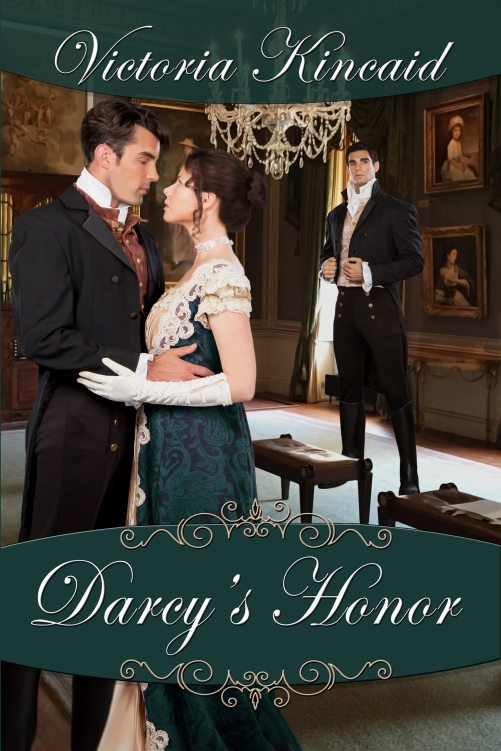